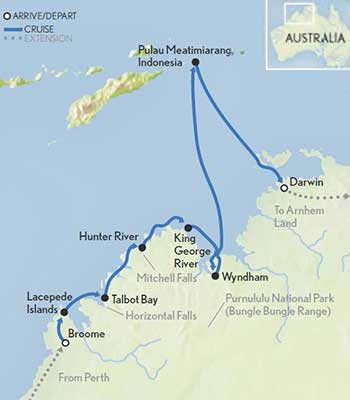 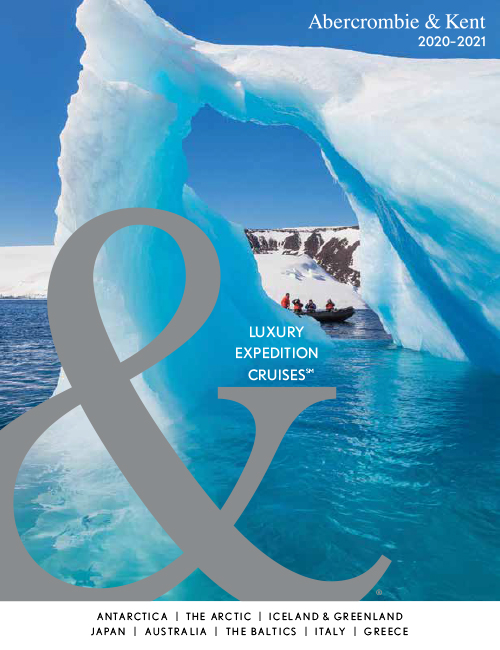 Arrive in Broome and transfer to your hotel near Cable Beach. Poised at the western edge of the Kimberley and hemmed by the blue Indian Ocean, Broome is the region’s largest city, yet every bit as daring as its more sparsely populated counterparts. The next day, explore this swashbuckling treasure at your leisure, taking in its sweeping beaches, cinematic sunsets and relaxed atmosphere. Tonight, meet your fellow guests at a welcome dinner.

A day of adventure awaits with A&K experts who take you beyond the surface in Broome. Choose from pre-selected excursions that include a city tour revealing Broome’s historic pearling industry and rich multicultural past, and a birding walk on Roebuck Bay. Later, board ‘Le Laperouse,’ your luxury expedition cruiser for the next 10 nights.

For the next five days, enjoy privileged insight and access to one of the most rarely visited regions in Australia. Each day, inspiring lectures, briefings and stimulating conversations with your Expedition Team elevate your discoveries in the Kimberley, bringing this vast wonderland into focus in a most enriching way. Grasp the tremendous benefit of exploring with our experts as luxury ‘Le Laperouse’ cruises through archipelagos and along the Kimberley coast. Your Captain and Expedition Team determine the best daily excursions, which may include these stunning regions:

Lacepede Islands: Set atop a coral reef, these four lowlying cay islands are separated from mainland Australia by the Lacepede Channel. The “Lacepedes,” as they are often called, are an important nesting site for green sea turtles and several species of seabirds, including brown boobies, red-chested frigate birds, crested terns and speckled ruddy turnstones.

Horizontal Falls: An exciting visit awaits at Horizontal Falls, described by David Attenborough as “one of the greatest natural wonders of the world.” Set within Talbot Bay, the horizontally flowing waterfalls are created when massive tidal currents squeeze through two narrow gorges. Experience the phenomenon on a boat excursion to these unique falls.

Freshwater Cove: Enjoy a guided bushwalk that leads to a cave depicting indigenous rock art. A magnificent display of sacred Wandjina figures, these ancient paintings reveal the ways of the Worrorra people, their myths, traditions and powerful connection to the sea.

Mitchell Falls: Take off on an included, thrilling helicopter flight over the vast Mitchell Plateau to sandstone-carved Mitchell Falls. Explore the area on foot and perhaps enjoy a refreshing swim in the emerald-colored, freshwater pools formed by the falls.

Hunter River: Join your naturalist guides and navigate by Zodiac through the river’s small tributaries fringed by mangroves and tidal mud flats, searching for crocodiles, mud skippers and fiddler crabs, and the many bird species that nest in the dense vegetation.

During one of his many survey expeditions, Philip Parker King named Vansittart Bay after the pre-1788 Indonesian pottery found there. Conditions permitting, visit Jar Island, home to incredible ancient rock art of mysterious origin. Known as “the Bradshaws,” the painted stick-like figures are named for pastoralist Joseph Bradshaw, who first recorded seeing them in 1891. Said to date back as far as 30,000 years, the Bradshaws are among the oldest depictions of human figures in the world.

Arrive in Kooloma Bay at the mouth of the King George River, named in honor of King George V. Our naturalist guides pilot Zodiacs upriver through a spectacular canyon, draped in sandstone cliffs, gorges and mangroves, where you may also spy impressive Aussie wildlife, such as the saltwater crocodile. Arrive before the awe-inspiring King George Falls, plummeting from an elevation of 276 feet.

Beautifully poised between rugged hills and Cambridge Gulf in the northernmost region of the Kimberley, the former gold-rush town of Wyndham is the gateway to a bounty of photogenic wetlands. This includes the spectacular Ord River, where you may spot unique birds; the man-made Argyle Dam; and UNESCO World Heritage Purnululu National Park, home to the iconic Bungle Bungle Range. Design Your Day when you choose from a wildlife cruise on the thriving Ord River or a scenic flight over east Kimberley and the Bungle Bungles, one of Australia’s greatest natural wonders.

Enjoy a day at sea and the opportunity to unwind with fellow guests and your Expedition Team, while ‘Le Laperouse’ cruises to Pulau Meatimiarang, Indonesia, to clear customs. Take time to reflect on your adventures, share photos and attend another intriguing lecture. You may also choose to relax and enjoy the ship’s facilities, perhaps at the spa or in your room with views from your own private balcony. Later, join your Expedition Team and the new friends you’ve made for a special farewell reception and dinner, a celebration to mark the culmination of an unforgettable expedition.

Bid farewell to your Expedition Team before disembarking ‘Le Laperouse.’ Transfer to the airport to board your flight home or continue exploring on our post-tour extension program.

Meals: Breakfast
Note: Itinerary is for guidance purposes only and may be adjusted due to unforeseen circumstances including weather, medical emergencies and other conditions beyond A&K’s control at the sole discretion of the Captain.

Cable Beach Club Resort & Spa
Surrounded in tropical gardens with a modern colonial vibe in Broome, this resort features an ocean-facing bar and grill, two large pools, and a spa.

Experience the coast of Cape Range National Park, where you snorkel and swim with whale sharks in Ningaloo Reef. 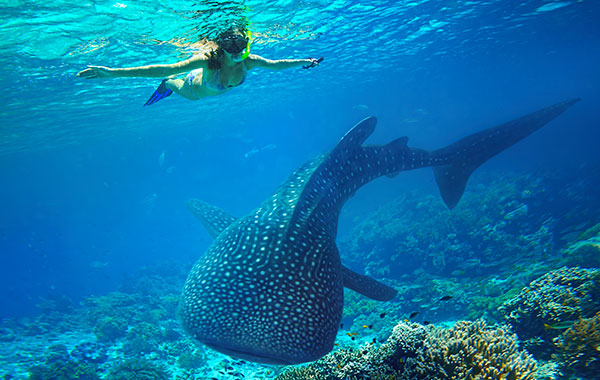 Arrive in Perth, Australia, and check in to your chic, centrally located hotel. Enjoy time at leisure before tonight’s welcome dinner.

Fly to Exmouth and transfer to your barefoot luxury beachfront safari camp in the dunes of Cape Range National Park. The camp fronts Ningaloo Reef, and you may swim in its clear waters with time at leisure before dinner under the stars tonight.

After breakfast, set off to snorkel and swim in Ningaloo Reef. You may encounter migrating whale sharks that visit the area from fall to winter, and which can grow up to nearly 40 feet. Other sea life to discover along the reef may include turtles, dolphins and rays.

Enjoy a day partaking in the activities on offer at your doorstep. Return for a snorkel in the reef, home to over 500 species of fish. Venture into Cape Range National Park for guided walks, discovering its unique geology and abundant wildlife — everything from red kangaroos and rock wallabies to fairy wrens, reef herons and ospreys. At night, stargaze under southern skies.

Fly to Perth, where you board your onward flight to Broome. Begin your main program.

Experience prized wineries in the Margaret River region, the Jewel Caves of the Karri forest and beachfront Perth. 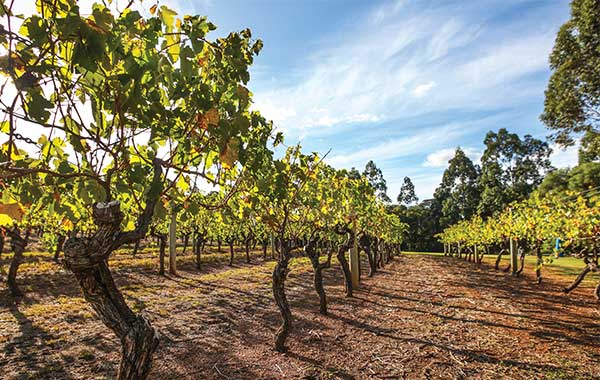 Arrive in Perth, Australia, where you are met and transferred to your elegant hotel.

Drive to Western Australia’s Margaret River wine region, stopping en route to ride Busselton’s jetty on Geographe Bay and to explore the Jewel Caves of the Karri forest. Check in at your Margaret River lodge and enjoy dinner at its acclaimed restaurant. The next day, indulge in tastings at prize wineries followed by exquisitely paired meals.

Drive to Perth. Tour Fremantle, enjoy lunch at a brewery and stop at Cottesloe beach. 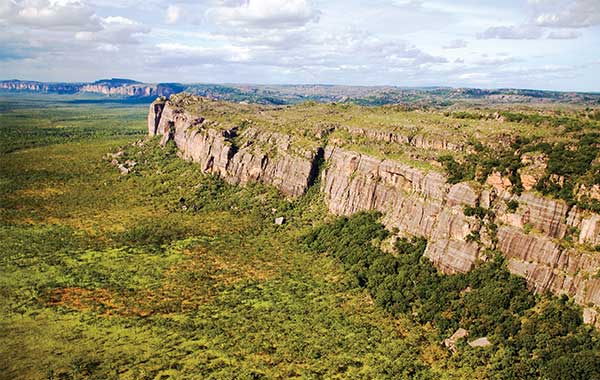 Explore a vast aboriginal reserve with activities from fishing to a billabong cruise.

Disembark ‘Le Laperouse’ and board your private charter flight to untouched Arnhem Land, one of the largest Aboriginal Reserves in Australia. Arrive at your atmospheric ecolodge set within the reserve.

Return to Darwin via small aircraft and then enjoy a panoramic city tour.

Transfer to airport for your flight home.

Categories 4-8 include room upgrade at the hotel and butler service aboard the ship.

Guests flying from the U.S./Canada will cross the International Dateline and may be required to depart 2 days prior to their targeted arrival date.

Payment Schedule
Deposit Per Person at Time of Booking $2,500 (full-payment if within 120 days of departure)
Final Payment Due 120 days prior to departure