Turkey: Crossroads of Empires Past

With its feet firmly planted on two continents, Turkey is the epitome of a cultural melting pot, a blend of the best that Europe and Asia have to offer. Iconic Istanbul, straddling the Bosphorus, is a twisty mix of winding bazaars, mouth-watering cuisine and thousands of years of history. Explore the remnants of the Roman, Byzantine, Latin and Ottoman empires while enjoying privileged access to the city on an after-hours tour of the renowned Hagia Sophia, the sixth-century Basilica Cistern or magnificent Topkapi Palace.

Discover the marvelous Fairy Chimneys of Cappadocia while floating over the stunning landscape in a hot air balloon. Venture to Izmir, embracing more than 8,000 years of history from her perch on the Aegean, and visit Ephesus, which legend says was founded by a tribe of female warriors in the 10th century BC. Travel to Bodrum and explore fourth-century Bodrum Castle, built partly with stones from the Mausoleum at Halicarnassus, one of the Seven Wonders of the Ancient World. Wander through the ruins of once-mighty Kaunos and discover the nesting sea turtles of Iztuza Beach.

From a street vendor’s hot, fresh corn to the just-caught-and-grilled herring in a Michelin-starred restaurant; from soaring mountains to white-sand beaches and crystal-blue water; from a whirling dervish performance to a serene Turkish bath, this magnificent country of cultures will inspire and delight. Let A&K show you Turkey’s many sides in unparalleled comfort and luxury. 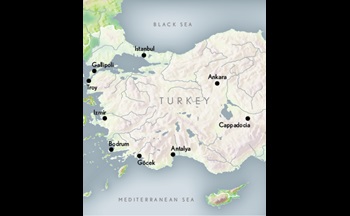 See All Europe Tailor Made Journeys