The Great Migration Safari in Style

The key to experiencing one of the world’s most spectacular wildlife migrations is to think of it as a never-ending show happening across East Africa’s most impressive parks and reserves.

Images and scenes of massive herds of wildebeests and zebras thundering across East Africa’s croc-filled rivers and grassy plains stalked by lions are often what come to mind when we imagine the Great Migration, but experts agree these are merely teaser moments for one of most sweeping and magnificent wildlife migrations on the planet. That’s because Africa’s Great Migration is anything but a singular river crossing or stampede happening in just one place in East Africa.

We spoke with senior A&K Private Label Guide David Bromham, who has guided hundreds of East Africa safaris for A&K since 1995, and compiled this comprehensive guide. Here’s everything you need to know to plot an incredible Great Migration safari experience. 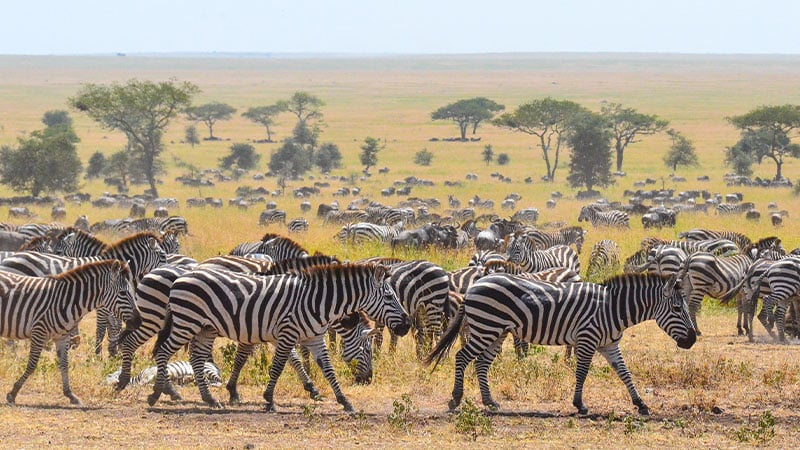 What is the Great Migration?

Throughout the year, East Africa’s wide-open grasslands are the setting for the Great Migration as millions of wildebeests, Burchell’s zebras, antelopes and other herd animals make the trek from the Serengeti in Tanzania to the Masai Mara in Kenya. While significant numbers into the multi-thousands (mega-herds) do clump together, more often there are smaller herds spread throughout a region or multiple regions. All of these herds make the trek with two things in mind: fresh grazing lands and water.

“The smell of rain and sound of thunder spur the migration forward, but sometimes sideways and even back,” says David. Along the way, many migrating animals become prey to predators including lions, cheetahs, crocodiles and hyenas. In fact, David shared that around 250,000 wildebeests and 30,000 zebras perish in this tough trek, mainly younger ones. “Many times, mother wildebeests will just start running and keep running, not knowing that their young can’t keep up.”

"Though it is sometimes referred to as annual event, the Great Migration is actually a fluid and continuous, year-long journey of animals migrating through Tanzania and Kenya." 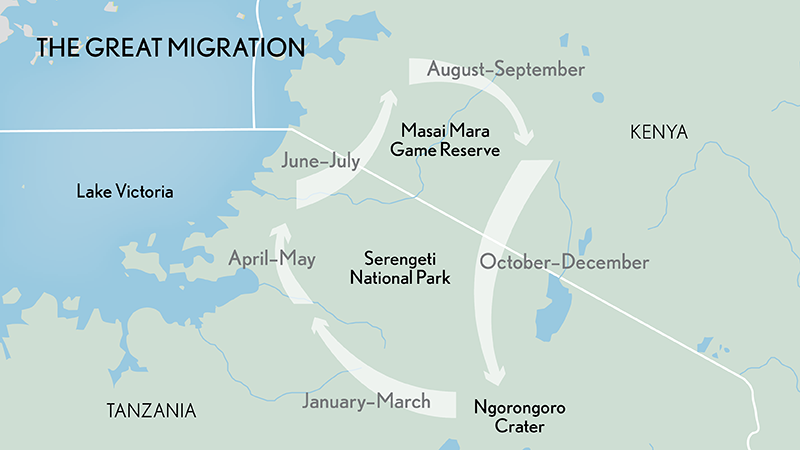 Though it is sometimes referred to as annual event, the Great Migration is actually a fluid and continuous, year-long journey of animals migrating through Tanzania and Kenya. In total, this circuit spans some 1,200 miles. Yes, dramatic river crossings are part of the migration, but they are only a small part of a far more complex chain of events that play out from season to season across two different countries. These events include mating rituals, calving and the shifting fortunes of the herd, all of which are influenced by the subtle changes in rainfall that occur year over year.

Where and when is the best time to see the Great Migration?

The answer to the most common question about this epic movement of animals chasing water and food across two countries with two different ecosystems is anything but simple. Rain patterns have the ultimate say in the herds’ plans and movements, but generally speaking, David and most safari experts note that the herds of the Great Migration typically follow a similar path year over year that begins in Tanzania’s Serengeti and ends in the Masai Mara in Kenya. 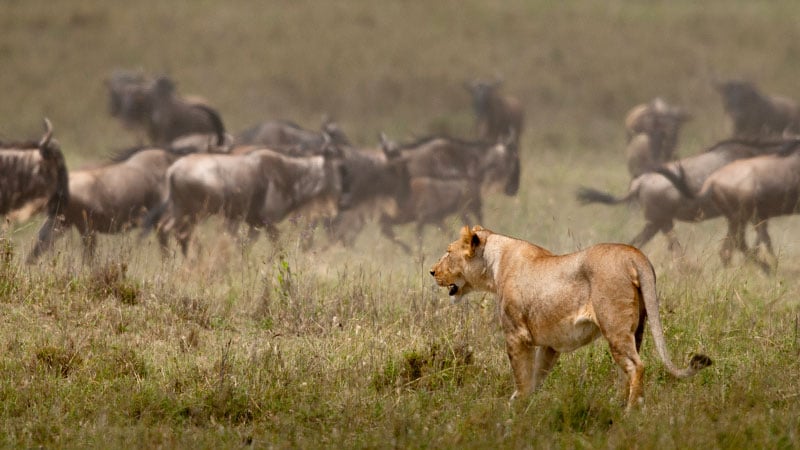 From December through early March, the herds are mainly found in the Serengeti in Southern Tanzania. “Wildebeests tend to congregate in February, when they give birth to up to 500,000 calves over a two- to three-week period,” David says. “The reason for concentrating in the south is to give their calves the richest milk, as the soil and grass is rich in potassium, calcium and phosphorus from the volcanic eruptions of two to three million years ago.” David explains that the Serengeti’s short grass are also a draw. “Wildebeests prefer to calve here, without fear of predators that typically lurk in taller grass.” Even still, prides of lions are living their best lives at this time and predator action is a-plenty.

April to May marks the season of long rains. The herds begin their trek north across the central and western Serengeti, grazing hungrily as they go. The food supply begins to vanish. “By April,” David says, “most of the grass is gone.” As the Serengeti dries up, the herds follow the Grumeti River west.

From June to July, the herds are grazing their way through the Serengeti’s western corridor and continue to push north towards the Masai Mara. “By June the Grumeti River is low, often leaving crocodile-infested pools as the only water source in the area, and both wildebeests and zebras drink almost three gallons daily,” David says. “Come July, the herd can be found in the northern reaches of Tanzania, near Kenya’s border. At this time, the herds also hasten their approach to the Masai Mara as the reserve receives rain from Lake Victoria, about 70 miles away.” 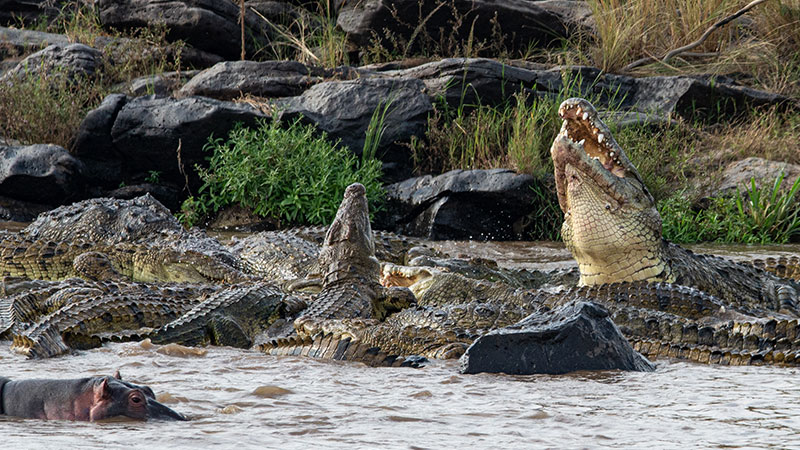 Large portions of the migration tend to arrive into the Masai Mara by August, when traffic jams and crossing at the Mara and Talek rivers are apt to reach their frenzied climax. “August is probably the best month to catch a crossing, but take a book and plenty of patience, as it is a waiting game,” says David. “Feast-or-famine crocs lick their chops for four months of the year in total, though they can survive on fish and the fat in their tails for a year or more.”

From October through November, the herds start to leave the Mara and turn south. Ever on the move for greener pastures, they begin their return to the Serengeti for the start of Tanzania’s rainy season. “By early October, the Masai Mara grasslands are pool-table flat,” David says. “The million-beast march starts the winding journey south, consuming approximately 5,000 tons of grass a day.”

What’s the best way to experience the Great Migration?

A well-designed East Africa safari in Kenya, Tanzania or both can put you right in line with the action. Pioneers of the modern luxury safari offering everything from Tailor Made private safaris to Luxury Small Group Journeys, A&K knows exactly where to be and when for the Great Migration. Start with these top-selling A&K luxury East Africa safaris.