In Morocco’s heady spice souks, be prepared for an exciting sensory experience.

An exotic mix of sweet, spicy and smoky aromas will wash over you before you even set eyes on the panoply of colors and shapes that await. There’s towering cones heaped full of golden turmeric and deep red paprika, and the textures of star anise, cardamom pods and saffron threads. Welcome to the vibrant and dazzling spice souks of Morocco, the country’s beating heart and a staple of everyday Moroccan life for nearly a millennium. Explore these living works of art on a Morocco luxury tour with A&K or on a custom Luxury Tailor Made Travel experience, and delve deep into the fascinating world of spices. 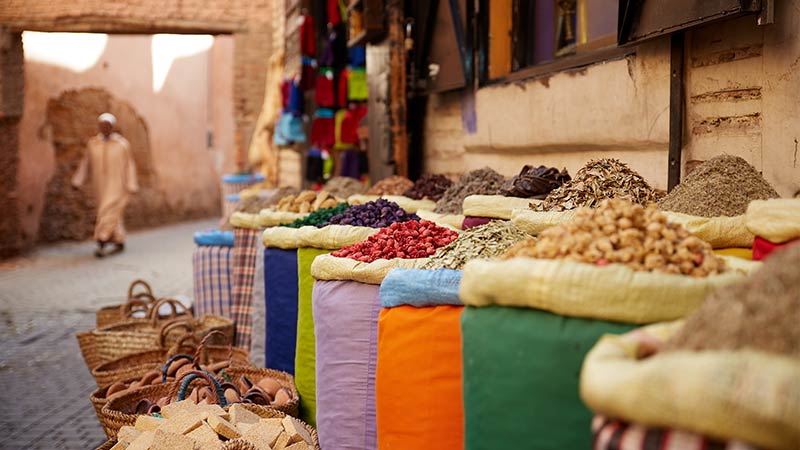 History of an extraordinary bounty

The Spice Route that stretched from China through the Middle East and Africa to Europe was as important a trade route as the Silk Road. Foods consumed in ancient and medieval times were not always palatable, and the spices brought back via the Spice Route by European explorers were welcome additions — and extremely valuable commodities. Cinnamon, for example, was so prized by the first century AD that just 12 ounces of it had the same value as 11 pounds of silver. Roman Emperor Nero showed his supposed remorse for killing his wife by burning a year’s supply of cinnamon on her funeral pyre.

Take a look at the journey of some of Morocco’s most famed spices: 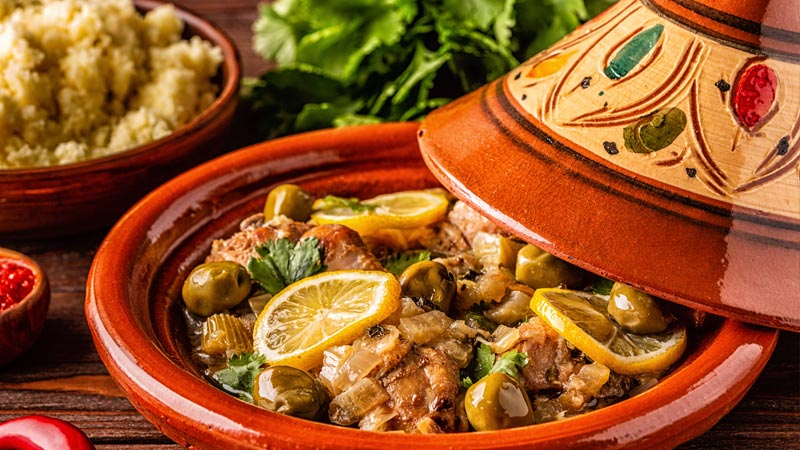 Morocco’s prominent coastal location also made it a crossroads of many civilizations. Political refugees fled Iraq in the Middle Ages and brought their traditional recipes with them, many of which combined fruit with meat. The Spanish Moriscos (Muslim refugees), Turks and the native Berbers also contributed their favorite dishes. The Moroccans took these recipes further, infusing them with rich spices to create a diverse, flavorful cuisine.

In the past, a Moroccan spice shop owner would have his own mix of spices called the ras el hanout (literally, head of the shop), a secret “house blend” that might combine anywhere from 10 to 100 spices. Today, ras el hanout is the common name for these mixtures, and spice vendors compete to produce the most sought-after blend.

Morocco’s native fruits and vegetables, as well as sheep, poultry and cattle, also serve as a foundation for its cuisine. Cumin, coriander, saffron, chilies, ginger, cinnamon and paprika are standard ingredients, as is harissa (a paste of garlic, chilies, olive oil and salt). Harissa makes for pungent dishes that stand out among the milder foods more common in Mediterranean cooking.

Befitting a culture with such a rich cuisine, even everyday meals are celebrations. Families gather for a lunch of tagine (the name for both the cooking pot and the stew), complemented by a variety of salads and bread, followed by dessert and mint tea. The reputation of these traditional dishes such as these, with their diverse ingredients, has deservedly grown, and many Moroccan restaurants have surfaced throughout the world. And why wouldn’t they? Once you’ve tasted a slow-cooked tagine or have had a recipe enhanced by harissa, your palate will yearn for an encore.

Ras el hanout: Mix together 2t cinnamon, 2t cumin, 1t coriander, 1t allspice, 1t turmeric, 1t cayenne pepper, 1t mint, 1t ground cloves in a glass jar. Mix about 2t (or as much as needed) of ras el hanout to coat the beef. Set aside beef for an hour or up to overnight. Save the remaining seasoning for future use. Heat olive oil in a large skillet on medium. Add onion, garlic and red bell pepper to skillet. After 3-4 minutes, add the beef and sear. Put contents of skillet as well as remaining ingredients (except for almonds, orange rind and coriander) into a crock pot (cook on low for 8-10 hours) or into an oven-safe casserole dish or clay tagine pot (cook in oven at 350 for 3 hours). Shortly before serving, gently toast the almonds in a skillet until they start to brown. Chop the fresh coriander. Serve tagine over steamed couscous and top with toasted almonds, grated orange rind and chopped coriander.