On safari, a first-timer ventures deep in one epic day through the Moremi Game Reserve and Botswana Okavango Delta.

Waking on safari in Botswana’s Okavango Delta is something magical. First comes the steady call of the African mourning dove, which overpowers the rest of the bush choir; the rustling trees on the other side of the canvas walls (what could that be?), only occasionally audible over the whirring fan above the bed; and then the morning light slowly spilling into the room. On an A&K luxury Botswana safari like this, there’s also the bush equivalent of an alarm clock: French-press coffee delivered to our door by the cheery camp staff and served on a tray dressed in white linen.

Travelling with A&K, we had flown from South Africa to Botswana and Sanctuary Chief’s Camp, set in the Okavango Delta. A favorite A&K camp, Chief’s sits on its namesake island in the Mombo Concession within the Moremi Game Reserve, which is the only protected area within the delta. Wildlife is especially plentiful here and drivers may venture off-path to pursue “Big Five” game (black rhinos, Cape buffalo, elephants, leopards and lions) — something that is not allowed in Africa’s national parks. 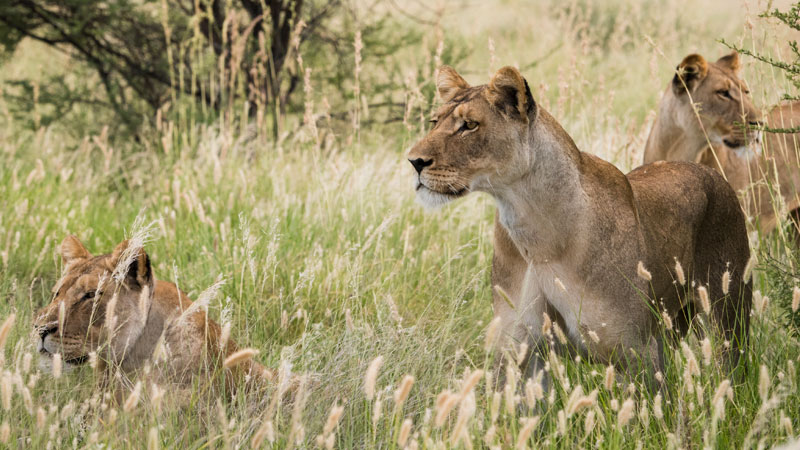 Searching for Lions in the Moremi Game Reserve

Our A&K guide revealed that a pride of lions had been spotted nearby, and the plan for our morning game drive was to go out in search of it. After a big breakfast in the main lodge, we hopped aboard our open-air 4x4, a custom A&K-outfitted safari vehicle, and set off across the delta with our driver, Sky. Born in the small village of Etosha along the Okavango River, Sky operated with a sort of sixth sense, zigzagging purposefully across the landscape. Every so often, he would cut the engine to listen or to take a closer look at the path. “There,” he said, pointing to one suddenly distinct paw print in the dirt. “That is from a male lion, a big boy.” He turned the engine and we were in pursuit again.

The sun was rising higher in the sky and we knew we were racing against the clock; the lions would soon be looking for shade. The group had grown quiet and perhaps began to entertain the fact that we might not, in fact, see the lions. But I was enjoying the work of tracking, of being present and trying to listen with my whole body, as Sky appeared to do. Suddenly, Sky raced toward the remains of a fresh kill, which appeared to be an impala (“Only a snack for these big guys,” said Sky), so fresh that it had not yet attracted the attention of vultures or hyenas. The pride was close.

“Suddenly there was a call on the radio and Sky announced that he had something very special for us — a wildebeest was about to give birth and a leopard was nearby.”

A call from Sky’s radio announced a location and we darted off. No one said a word as Sky pulled our vehicle slowly to the edge of a canopy of trees, under which several female lions were resting. Some were panting with drowsy eyes while others were already asleep on their sides. No male was in sight; they typically keep their distance with the job of protecting the pride. As if coming out of the woodwork, the faces of a few older, but still-timid, cubs began to appear from behind the leafy bushes. They watched us with more curiosity than the adults, who seemed mostly unaffected. One of the females got up and headed into the forest in the background, a cub trotting alongside her. Sky whispered that she was thin compared to the other lionesses (“See her belly?” he asked), and had probably not had much to eat today. I had dreamed of seeing lions in the wild for most of my life, but I wasn’t prepared for its power to silence, the beauty and lingering shock that it was really happening. 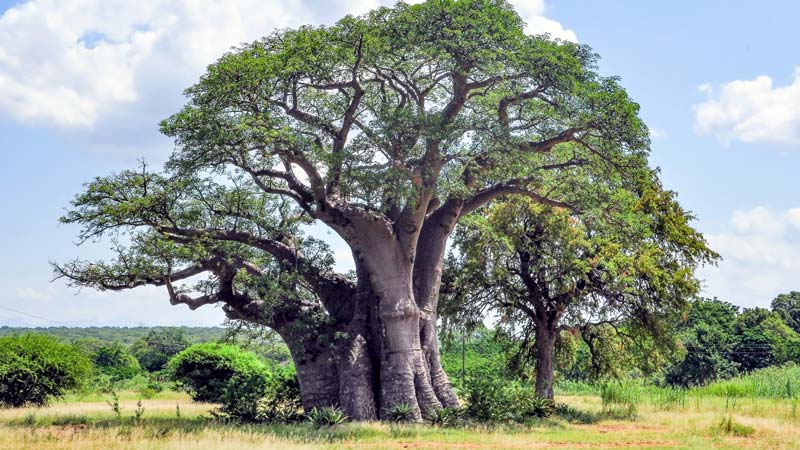 For our afternoon game drive, we set off in another direction and toward an expansive veldt populated with zebras, marabou storks scouring the grass for dung beetles, and even one lightning-fast springbok. Sky drove along the periphery, pointing out a massive tree in the distance, an African baobab, also known as the Tree of Life. The tree was some thousands of years old — which was hard to grasp — and its trunk was over 30 feet in diameter. The elephants had done a number on it, too, tearing away deep and wide chunks of its cork-like bark. Sky noted that the elephants go a bit mad for its water and can even seem drunk upon indulging in it. When I asked if the tree would survive, he told us that when the plains filled with water again in winter, the baobab would heal itself.

Suddenly there was a call on the radio and Sky announced that he had something very special for us — a wildebeest was about to give birth and a leopard was nearby. I did not know how to feel about either, but yes, we had to get there now!

The large wildebeest began to take shape in the grass, but sadly, she had died before birthing the calf. While it was a heart-wrenching sight, it showed the circle of life in action. No sooner had we taken in the scene when, some 50 feet away, a female leopard swished her tail in the shade. 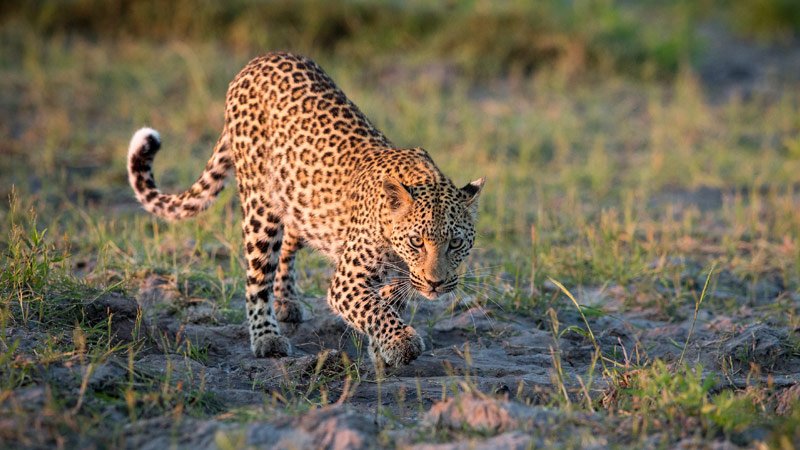 My heart began to race wondering what might happen next. She surprised us by walking away from the wildebeest and into the dense forest surrounding the open plain. She was gorgeous.

Sky turned our vehicle and followed her off the savanna and into the brush, something that is uniquely permitted in private concessions like the Moremi Game Reserve. The vehicle commanded the terrain with impressive power and agility as we passed over the forest threshold. Sky pointed out two other kills — a warthog and a pelican — the leopard had stashed away under the trees. No wonder she had walked away from the wildebeest; she was full! She sat on top of a log before flopping down and rolling in the grass, where she playfully pawed the long strands of a skinny palm. She seemed to be putting on a show just for us. When she grew tired of this game, she walked around the vehicle and stopped for a moment to look up at us before darting by. I don’t remember when I stopped breathing, but I gasped as she took off into the forest. Totally awestruck, I sat back in my seat, reminding myself that this was the kind of moment — the kind of day — I would not likely have again in my life.

We crossed a stream in our nimble 4x4 to where a multi-colored sunset and sundowner cocktails awaited us. All of it — from the exquisite location to the fresh lime and spiced chicken skewers — was arranged by our A&K staff. We hadn’t yet noticed the huge pod of hippos around the swampy marsh, but they had seen us and left only the flash of their giant bodies as they plunged into the water. Honking and bellowing, they kept their eyes on our every move and occasionally opened their mouths as a threat gesture, even though we were over 150 feet away.

The horizon dimmed with hues of pink, blue and lavender as the sun continued to sink, now showing behind the silhouettes of palm trees. Behind us, a storm was brewing and a column of rain marched steadily toward us. We toasted and tipped back our cocktails, mine a vodka and tonic, before racing back to camp to beat the rain. 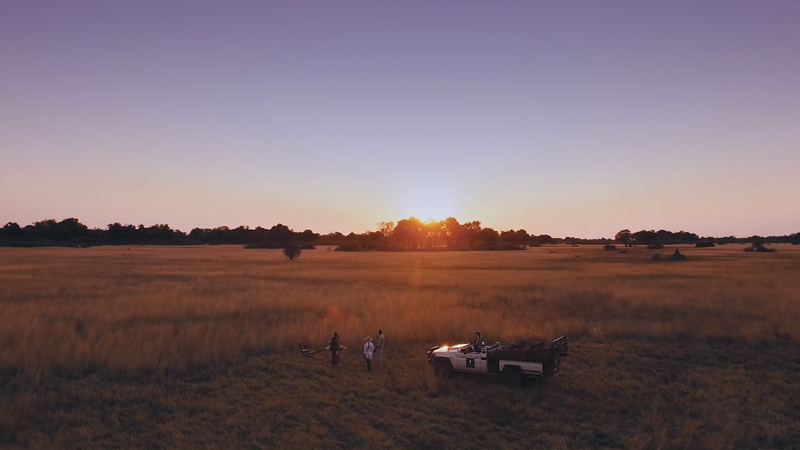