8 Birds to See on Your Antarctica Cruise

8 Birds to See on Your Antarctica Cruise

Some of my favorite animals on earth are easily seen in Antarctica, especially if you visit the very beautiful and remote island of South Georgia and the warmer, wildlife-packed Falkland Islands. From the bright-white snow petrel that is unmistakable among the pack ice, to the predatory brown and south polar skuas — those marauders of the penguin colonies — the flying seabirds we encounter as we cross the Drake Passage rival the more popular show-stopping penguins of Antarctica for their beauty, grace and adaptability.

Speaking of penguins, the Adélie is my absolute favorite, because what they lack in colorful plumage, they make up for in comical displays, vocalizations and general goofiness. The funniest thing is to watch them gathering pebbles for their nests, especially when they steal each other’s pebbles at the same time. This goes on throughout the breeding season and is a source of endless entertainment.

Adélies are also fun to watch when entering the water. One or two by themselves do not want to go in for fear of a leopard seal, which can eat up to ten penguins a day. So, they wait until there is a group and then they start calling in a frenzy, pushing each other from behind and — all at once — go tumbling into the sea. I always say it takes ten Adélie penguins to make a decision. 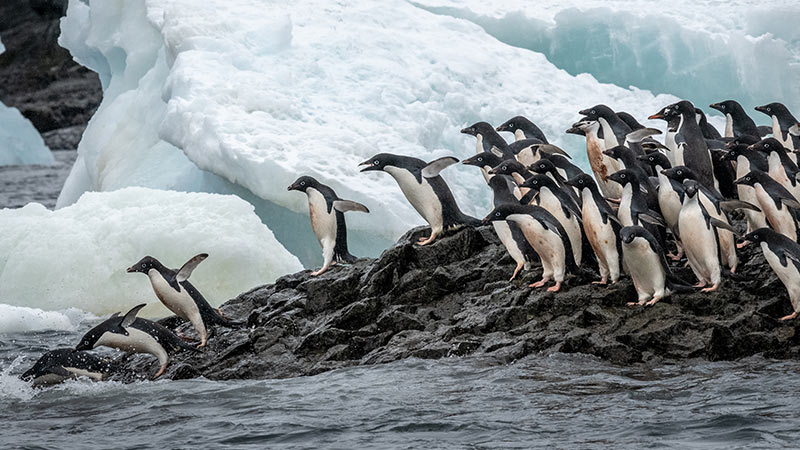 The other spectacular penguin that is a treat to see is the brightly colored and always-busy king penguin. Unlike most penguins, they lay one large egg that they must balance on their feet to incubate for 55 days, and then later protect the chick, which then takes nine months to fledge. The brightly colored auricular patch on their necks, along with their pinkish to purplish beaks provide photographers with incredible opportunities, especially when they are trumpeting and courting. But the most incredible thing to see is the sheer magnitude of the big breeding colonies, sometimes numbering in the tens of thousands. It is a magical display of the animal kingdom, something A&K guests to South Georgia get to see.

“The star of the wind and waves, dynamically soaring and rising higher and higher by using the near-constant updrafts, and then falling forward seemingly without moving a muscle, is the wandering albatross — the majestic seabird that weighs up to 25 pounds.”

The star of the wind and waves, dynamically soaring and rising higher and higher by using the near-constant updrafts, and then falling forward seemingly without moving a muscle, is the wandering albatross. The largest flying seabird in the world, it weighs nearly 25 pounds and has a wingspan approaching 12 feet. They can remain aloft — though they do rest on the water when there is no wind, and plunge-dive under water to feed on squid and fish — for perhaps 20 days, travelling thousands and thousands of miles. They don’t breed until they are about eight years old, and this is only after a few years of elaborate and vocal courtship rituals where they choose an appropriate mate for life. Wandering albatrosses take approximately 300 days to fledge their one big chick, and adults can live up to sixty years. 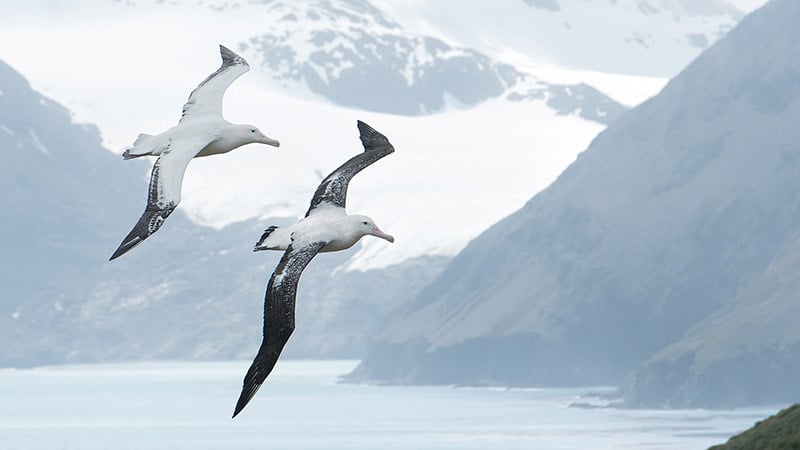 Perhaps the most beautiful of all albatrosses is the light-mantled sooty albatross, an absolutely stunning bird with a charcoal grey head, lighter grey body, a paler “mantle” which is between the shoulders, and a small white, crescent-moon shaped eye patch. Light-mantled sooties are most commonly seen around South Georgia, where they nest on steep tussock-covered hillsides and where, with luck, you can hear their haunting courtship calls echoing off the cliffsides.

Known to most of us at least in theory, the Antarctic tern is an impressive, high-flying, fast, loud, territorial and sometimes very aggressive bird, and the only tern species to breed in the Antarctic Peninsula. They are unmistakable with their coral red beaks and their nearly translucent grey pointy wings. We see them on many landing sights, usually nesting and raising hell in the scree slope rubble where their few eggs and chicks are camouflaged. They are perhaps best known for their spectacularly long migrations, which occur after the breeding season as they head north, sometimes all the way to the Arctic latitudes.

Once we cross the Antarctic Convergence, a very fun and sociable species of bird starts following us until we reach the Antarctic Peninsula: the cape petrel. This constantly flapping and gliding powerhouse stays with us day and night, perhaps hoping we might stir up some food as we sail southward. They are excellent at picking up the smell of any food that is dead or decaying on the surface of the ocean, but they will also perform shallow dives for krill and other zooplankton. This is the bird I would hope to come back to be in another life. They are smart, beautiful, fast, sociable, seem to have a lot of friends and a lot of fun, and they nest in one of the most beautiful places on earth, the islands of the Antarctic Peninsula and the lofty areas of South Georgia. 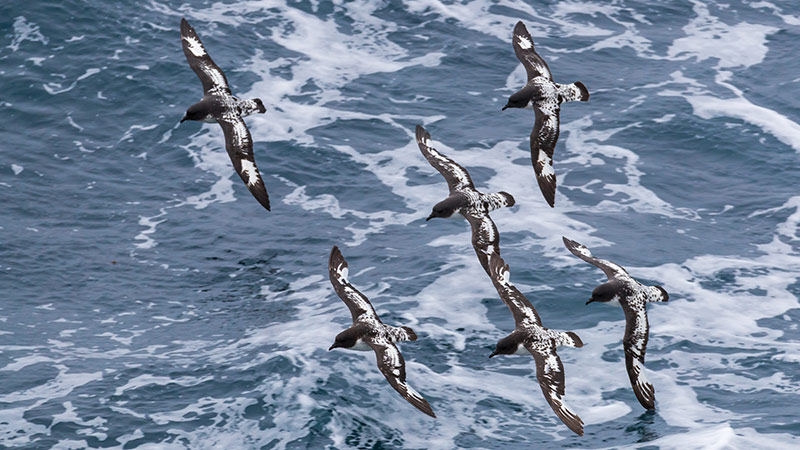