On a comprehensive adventure in the Land of the Pharaohs, cruise the Nile River for four nights aboard stylish ‘Sanctuary Sun Boat IV,’ and go ashore with local experts to discover ancient Egypt’s most awe-inspiring sites, sail the Nile in a felucca and view Cairo’s ancient treasures firsthand.

Cruising the Nile | Exploring by Sailboat

Cruising the Nile | View Hieroglyphs with an Egyptologist

Cruising the Nile | Luxor & the Valley of the Kings

Cairo | Marvels of a Museum & a Bustling Bazaar 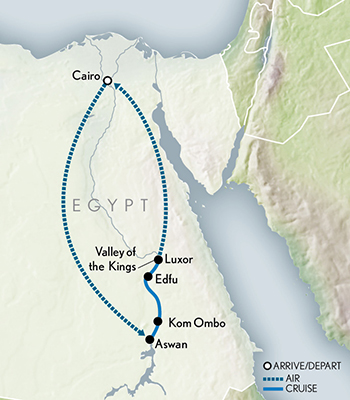 Arrive in Cairo where you are met by your A&K representative and transferred to your luxury hotel overlooking the Nile River.

Immerse yourself in the world of the pharaohs today, beginning with a visit to the pyramids of Giza, built some 4,500 years ago as tombs for the pharaohs Khufu, Khafre and Menkaure. Visit the nearby Great Sphinx for an up-close look at the enigmatic statue. Pause for lunch at a local restaurant, and then continue to Sakkara, site of the earliest surviving monuments to ancient Egypt’s god-kings. Sakkara features numerous step-pyramids, including the famous pyramid of King Zoser, the world’s oldest freestanding structure. Return to your hotel where the balance of the afternoon and evening are at leisure.

Cruising the Nile | Exploring by Sailboat

Fly to Aswan and, upon arrival, board your luxury Nile River cruiser, ‘Sanctuary Sun Boat IV.’ Enjoy lunch on board, and then Ride Like a Local, sailing on the Nile in a felucca, (traditional Egyptian sailboat) around Elephantine and Kitchener's islands, with an opportunity to view the splendid Aga Khan Mausoleum high above the river. Return to the boat for afternoon tea and a gourmet dinner.

Begin your day with a boat ride to Philae Temple on the island of Agilika. This sacred complex was dedicated to the goddess Isis and reflects a fusion of three great civilizations — Egyptian, Greek and Roman. The temple was dismantled and then painstakingly reassembled when the Aswan High Dam was constructed. Proceed to the granite quarries and site of the Unfinished Obelisk. Illustrating the skills of Egypt’s stonemasons, this monolith is one-third taller than any other ancient Egyptian obelisk. Return to the boat for lunch. Disembark at Kom Ombo (hill of gold) to visit the Greco-Roman temple dedicated to Haroeris (the sun god) and Sobek (the crocodile god), whom some ancient Egyptians considered the creator of the world. View the mummified remains of several crocodiles that once basked along the ancient Nile shore, just as their descendants do today. Back on board, learn to prepare local dishes during a cooking lesson with an onboard chef. Tonight, attend a festive "Egyptian Night" costume party on board your vessel. You may dress in galabeyyas (traditional Egyptian robes), sample local cuisine, listen to music and dance.

Cruising the Nile | View Hieroglyphs with an Egyptologist

Today, view the Temple of Horus, falcon-headed god of the sky. Built in 230 BC by Ptolemy III and once buried in sand and debris, this stunningly well-preserved and colorful structure reveals what temple worship in ancient Egypt was like. Return to your vessel for lunch as your cruise takes you to Esna. Disembark and join your Egyptologist guides to walk around the Greco-Roman Temple of Khnum and marvel at its impressive art and hieroglyphs. Next, stroll Esna's bustling streets to the temple site, located about 36 feet below the present level of the town, where it was excavated from the silt deposited over time by Nile floods. View inscriptions on the temple walls dating to the Roman period. Following your sightseeing, return to ‘Sanctuary Sun Boat IV’ and enjoy afternoon tea while you sail to Luxor.

Cruising the Nile | Luxor & the Valley of the Kings

Disembark for a full-day’s visit to Luxor, site of the ancient city of Thebes. Begin your explorations of the west bank of the Nile and the Necropolis of Thebes and view the Colossi of Memnon, two enormous seated statues of Amenhotep III. Proceed to the lovely Temple of Hatshepsut, ancient Egypt’s first female pharaoh and regarded today as one of its most successful. Continue to the Valley of the Kings, a UNESCO World Heritage Site. For a period of 500 years beginning in the 16th century BC, tombs were built along this valley for pharaohs and nobles, including that of “the boy king,” Tutankhamun. Enter the tomb of Tutankhamun — found in 1922 by British archaeologist and Egyptologist Howard Carter — to discover for yourself the secrets of this storied chamber. After returning to ‘Sanctuary Sun Boat IV’ for lunch, disembark to visit the east bank of the Nile, starting at the Temple of Karnak, where generations of pharaohs wished to record their names. Walk through the Great Hypostyle Hall, strolling among its expertly aligned columns, which soar to 80 feet high. End the day at the striking Temple of Luxor. View the three large statues of Ramses II along the front of the temple pylons, the Courtyard of Ramses II and the Colonnade of Amenhotep III, with its 50-foot-high columns. Walk in the shadows they cast, as visitors have done since antiquity, and ponder the astonishing feats of engineering and artistry it took to create them.

Return to Cairo today and check in to your luxury hotel. The balance of the day and evening are at leisure, a perfect opportunity for some shopping or sightseeing at your own pace, or to simply relax.

Cairo | Marvels of a Museum & a Bustling Bazaar

This morning, visit the Egyptian Museum of Antiquities to view its unrivaled collection of ancient Egyptian artifacts, chief among them the treasures from the tomb of Tutankhamun, including his iconic funeral mask. After lunch, visit the Mosque of Sultan Hassan, with its grand, soaring architecture and rich decoration, and the nearby Refaie Mosque, completed in 1912 with well-preserved, colorful decoration. Finish your day at the vast Khan El-Khalili Bazaar, reputed to be the largest bazaar in the Middle East, and originally founded as a watering stop for caravans. Wander through the labyrinth of narrow streets to find workshops and stalls selling all manner of things, from woodwork, glassware and leather goods to perfumes, fabrics and curiosities.

After breakfast, transfer to the airport to board your departing flight.

This journey contains some active elements.

Promotion begins Monday, November 30, 2020 at 9:00 a.m. CT and ends Friday, December 4, 2020, at 5:00 p.m. CT. Prices are per person based on double occupancy and are subject to availability. International and internal air are not included. Full payment is due at time of booking and is non–refundable. For barge private charters, prices apply to use of the entire barge up to the published maximum capacity and a deposit of 25% of the total charter price is due at time of booking and is non-refundable. These offers are not combinable with any other offer, discount or promotion. Other restrictions may apply.

Payment Schedule
Deposit Per Person at Time of Booking: 100% of the program price (non-refundable)

Cancellations must be received in writing. Additional terms and fees apply to Extra Services.