Spend an unforgettable holiday season in Egypt on board an A&K-exclusive charter of ‘Sanctuary Sun Boat III,’ experiencing a myriad of ancient treasures along the Nile. See the pyramids of the Giza plateau, set foot inside the tomb of Tutankhamun, sail the Nile in a felucca and immerse yourself in the hubbub of an open-air marketplace on a scavenger hunt.

LUXOR | LUXOR & THE VALLEY OF THE KINGS

CRUISING THE NILE | KARNAK TO ESNA

GIZA | THE PYRAMIDS & PAWS OF THE SPHINX 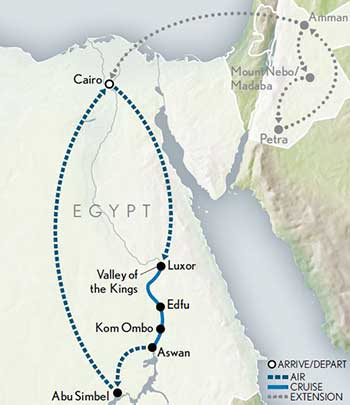 Arrive in Cairo, where you are met by your A&K representative and transferred to your luxury hotel with fantastic views of the Nile.

Drive to Sakkara, a site home to hundreds of tombs and 14 pyramids, including the Step Pyramid of Djoser. Admire beautiful tomb art, which gives rare insight into the lives of ancient Egyptians. See the tomb of Mehu, which dates back 4,000 years and was only recently opened to the public. Marvel at the Serapeum of Sakkara, burial place of the Apis bulls — the sacred animals said to be incarnations of the deity Ptah. Following lunch, walk from the twin-towered Bab el-Fotouh, a fortified gate in Cairo's Old City walls, to Khan el-Khalili Bazaar, one of the city's major souks (open air marketplaces), where you participate in a free-wheeling treasure hunt and put your bargaining skills to the test. Browse the tightly packed stalls displaying everything from spices and leather goods to jewelry and vegetables, all on a street that has hardly changed in centuries. Tonight, gather for a welcome dinner hosted by Abercrombie & Kent.

This morning, Cairo’s newest landmark, the Grand Egyptian Museum complex, beckons. Housing a treasure trove of pieces numbering over 100,000, the museum presents an opportunity for Egypt to preserve and display its legacy. One of its many highlights is the 5,400-piece collection of artifacts taken from the tomb of Tutankhamun, on display in its entirety for the first time. After lunch at a local restaurant, enjoy your afternoon at leisure.

LUXOR | LUXOR & THE VALLEY OF THE KINGS

Fly to Luxor, site of the ancient city of Thebes. Begin your full day of exploring here by visiting the striking Temple of Luxor. Behold the three large statues of Ramses II along the front of the temple pylons; the Courtyard of Ramses II behind the East Tower; and the Colonnade of Amenhotep III, with its 14 papyrus-headed columns, some fully 50 feet in height. Then, step aboard ‘Sanctuary Sun Boat III,’ where you enjoy lunch. Afterward, disembark to explore the west bank of the Nile and the Necropolis of Thebes, and continue to the Valley of the Kings, burial ground of the pharaohs and a UNESCO World Heritage Site. For a period of 500 years beginning in the 16th century BC, tombs were built along this valley for pharaohs and nobles, including that of “the boy king,” Tutankhamun. Found in 1922 by British archaeologist and Egyptologist Howard Carter, the tomb of Tutankhamun is yours to discover, as you set foot inside its 35-century-old walls. Also visit the tomb of Seti I, the father of Ramses II, one of the best-preserved tombs in the Valley of the Kings. Later, stop at the lovely Temple of Hatshepsut, ancient Egypt’s first female pharaoh and regarded today as one of its most successful. Continue to the Valley of the Queens and visit Queen Nefertari’s tomb, famous for the colorful, well-preserved artwork that adorns its walls. A photo stop at the Colossi of Memnon precedes your return to ‘Sanctuary Sun Boat III.’

CRUISING THE NILE | KARNAK TO ESNA

Journey once more to the east bank of the Nile, this time on a visit to the Temple of Karnak, where generations of pharaohs wished to record their names. Walk through the Great Hypostyle Hall; its expertly aligned columns, the largest of which is 80 feet high with a 33-foot circumference, are a sight to behold. This afternoon, sail to Esna and visit the Temple of Khnum, built during the reign of the Roman Emperor Claudius.

Continue your Nile voyage and join your onboard chef for a local cooking lesson. Later, disembark at Kom Ombo (Hill of Gold) to visit the Greco-Roman temple dedicated to Haroeris (the sun god) and Sobek (the crocodile god), the latter considered by some ancient Egyptians to be the creator of the world. While there, view the mummified remains of several crocodiles that once basked along the ancient Nile shore, as their descendants do today. Tonight’s dinner on board features an Egyptian night costume party, with a chance to dress up in traditional galabeyyas.

Cruise to Aswan and proceed to the impressive granite quarries and site of the Unfinished Obelisk. Illustrating the skills of Egypt’s stonemasons, this monolith is one-third taller than any other ancient Egyptian obelisk. Then, ride a motorized boat to Philae Temple on the island of Agilika. This sacred complex was dedicated to the goddess Isis and reflects a fusion of three great civilizations: Egyptian, Greek and Roman. The temple was dismantled and then painstakingly reassembled when the Aswan High Dam was constructed. Enjoy lunch followed by a session of henna hand painting. Later, Ride Like a Local around the Aswan islands in a felucca, weather permitting.

Today, bid farewell to ‘Sanctuary Sun Boat III,’ disembarking to fly to Abu Simbel. There, discover the commanding twin temples of Ramses II and his wife, Queen Nefertari. The former’s façade is dominated by four statues of the pharaoh, each nearly 70 feet tall. Perhaps even more impressive, this entire site was disassembled and moved here to save it from the floodwaters caused by the Aswan High Dam. Return to Cairo for an afternoon at leisure.

GIZA | THE PYRAMIDS & PAWS OF THE SPHINX

Today, visit the Giza Plateau, site of the pyramids of Mycerinus and Chefren as well as the Great Pyramid. Built in the Fourth Dynasty (approximately 2690 BC), it is the only survivor of the Seven Wonders of the Ancient World. You also visit the Solar Boat Museum, site of Cheops’ funerary boat. For a very special treat, meet the Great Sphinx and enjoy rare private access to the paws of this enigmatic monument. This evening, gather with your fellow guests to reflect on your journey through Egypt and along the Nile at a farewell dinner.

After breakfast, transfer to the airport and depart. 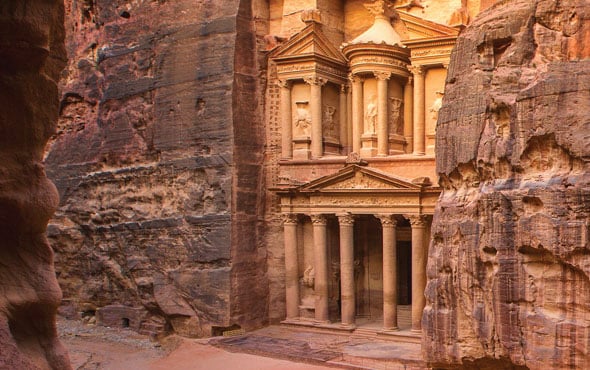 Arrive in Amman, Jordan, and transfer to your hotel downtown. The next day, tour the White City of Amman and visit the Roman ruins in Jerash. Later, gather for dinner.

Today, transfer to the airport and fly to Cairo.

Payment Schedule
Deposit Per Person at Time of Booking: $1,000 (full-payment if within 120 days of departure)
Final Payment Due: 120 days prior to departure