Discovering the Spirituality of Timeless Tibet

Staff writer Dan Wiencek travelled on A&K’s China, Tibet & the Yangtze. Here, he shares his account of one memorable day in a land little touched by modernity.

We set out on our first full day in Tibet eager but somewhat shaky. Being at 12,000 feet above sea level, our bodies were making do with 40% less oxygen than we were accustomed to, and even with the previous afternoon and night to acclimatize, my pulse was racing and my head stinging; climbing the three steps into the coach too quickly left me panting. After a short bus ride—being a city of only 200,000 people, nothing in Lhasa is very far from anything else in Lhasa—we came to Sanggye Dhunghor, known more commonly as the Thousand Buddha Shrine. 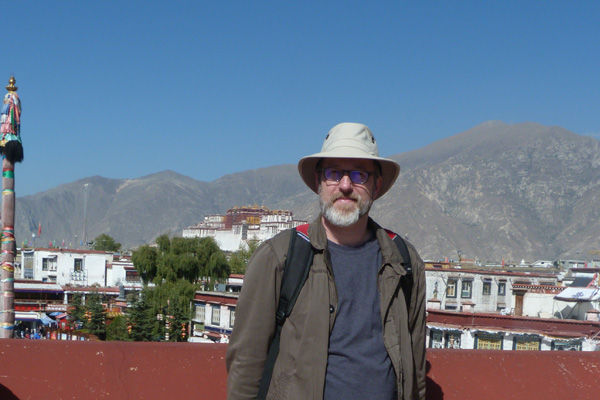 I knew before arriving that Tibet is a Buddhist nation; everyone does. What that meant in practice I plainly had no idea, and the Thousand Buddha Shrine provided the first insight. The shrine is a large open-sided rectangle filled with innumerable icons and images of the Buddha. Before this mass of imagery, a crowd of pilgrims gathers to prostrate themselves, a ritualized three-stage bow in which they drop to their knees, and then lean forward until their head touches the ground; they then nimbly slide back into a standing position and repeat the process, dozens or hundreds of times. This chilly morning found perhaps three or four dozen people partaking in this ritual; our group were the only visitors, and no one batted an eye at our presence. 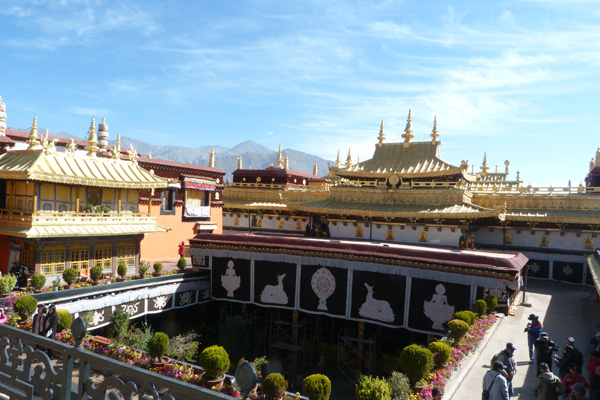 The same scene played out in more spectacular fashion at the next stop, the Jokhang Temple. The temple sits in a vast open square bathed in piercing Himalayan sunlight, canopied with clouds overhead and swaddled in pungent smoking incense at ground level. Here, one gets a sense of the full range of Tibetan life. Young and old, professional and vagabond all come together for one purpose: to express their devotion. A long, loosely packed line of pilgrims perpetually circles the temple structure, itself an act of worship; closer in, even more supplicants prostrate themselves before its façade, some equipped with prayer mats, knee pads and wooden mittens that allow their hands to skate smoothly over the cobblestones. 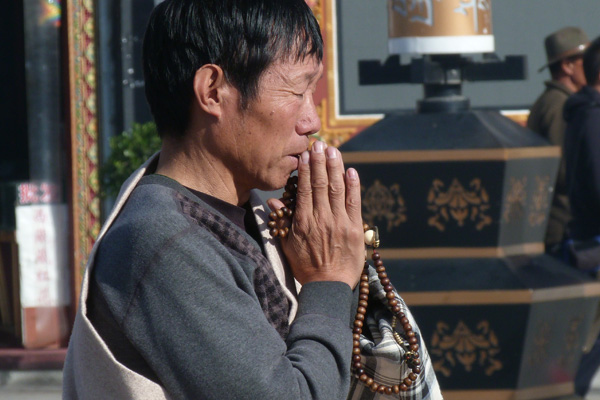 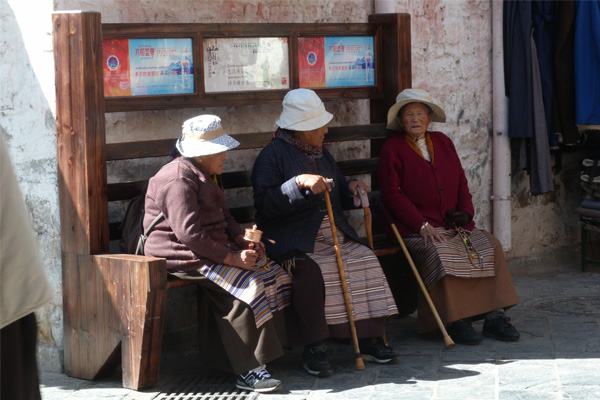 Drinking in this scene, I was struck by a feeling increasingly hard to come by on a China tour: the sense that I alone was observing this scene as an outsider, and that everyone else here was simply going about the normal business of life. Nearly everywhere you go in China, there are tourists—mostly other Chinese—all crowding each other for the best vantage points from which to photograph themselves on their phones. In Tibet, where entry is more strictly managed, the only crowds are of locals, and merely seeing a Western face outside of our own group was rare.

We removed our hats to visit the interior of the temple. Inside, the perambulations on the outside are reproduced in miniature: A more closely packed line of pilgrims traces a tighter ring around the interior walls, which are packed with shrines to the varied manifestations of the Buddha. Visitors pressed their palms and bowed; some fed the trough-like yak-butter lamps with fuel from plastic containers they carried, while others dropped one- and five-jiao notes into collection boxes. Here and throughout our visit, our guide pointed out where this or that pilgrim had come from, ably reading the colors, cuts and weaves of their clothes. Many are farmers or live in remote villages, and spend a great deal of time, money and energy to come here and quietly nurture their souls. It is a humbling sight to witness.

After lunch near the temple, we hauled ourselves back aboard the coach for another short ride, this one to Anni Tsankuhng Nunnery. We visited the main sanctuary, where a pile of sandals at the door revealed that the nuns were congregated inside. Shaven-headed and robed in red, they were mistaken by many in our party for monks. As luck would have it, the nuns were chanting, and we were free to come inside and listen, and even take pictures or video. The sound—a kind of sustained, intense murmur with a rhythmic rise and fall—is hypnotic anywhere, and nowhere more so than in the heart of a nunnery. None of us understood what the nuns were saying, which served to make the experience that much more mesmerizing. 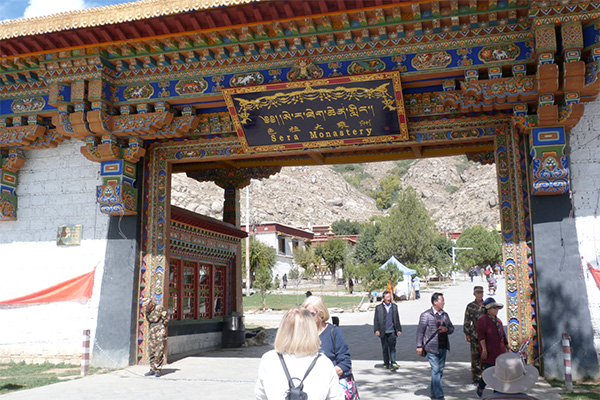 Our final stop for the day was the Sera Monastery, located on the base of a mountain just outside of town. The occasion of our visit was the monks’ debate, a daily exercise undertaken by a small selection of the 3,000 or so monks who live in this 28-acre complex. Trudging up the long incline to the debate courtyard, I heard a clamor of voices in the air; when I finally viewed the scene for myself, I was momentarily unsure what I was even seeing. 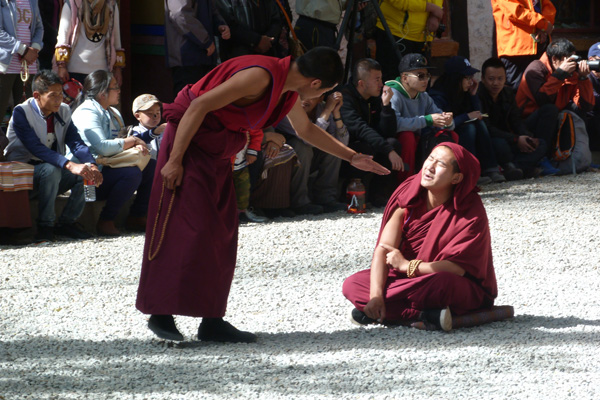 We call this activity a “debate,” but it’s more like a combination of (mostly) good-natured hazing and open-air oral exam. Monks sitting cross-legged on the gravel are questioned by other monks on some tenet of Buddhist philosophy. The questioning is loud, often hectoring and punctuated by sweeping, dramatic gestures. A question typically ends with a single declarative clap of the hands; other gestures that ensue are determined by how well the defending monk answers. At times, monks put on the spot in this manner squirm and dodge exactly the way we all did in school when we were asked a question we couldn’t answer. Yet by and large the interactions are friendly, with smiles and evident joking between questioner and respondent, and the energy of the scene on the whole—with dozens of these interactions all going on simultaneously—seemed just this side of chaotic. It’s the very opposite of the precise, timeless sounds we heard in the nunnery.

The contrast served to illustrate how vast a space Buddhism commands in the lives of Tibetans. As our guide explained, every home in Tibet (including his own) has an altar with a butter candle lit before it; temple visits are part of everyone’s daily routine, just like shopping or going to work. Chanting monks and kneeling pilgrims are just two of the more noticeable signs of a spiritual commitment that is unspoken and unbreakable, yet evident every place you go and on every face you see.