Discovering the Culture of Morocco

Published on January 6, 2017
by Abercrombie & Kent

On a recent luxury journey through Morocco, A&K staff writer Bennett Neuhauser found a culture in the midst of transition buoyed by a tradition of inner beauty.

From the crenellated ramparts of its iconic kasbahs to the pastel colors of its desert landscapes, Morocco outwardly plays to certain expectations - a Muslim country with Moorish architecture, an arid land where herds of sheep roam painted hills, Berber men sipping coffee in cafés, women walking on roadsides in scarves and djellabas - all overlaid with the enduring influences of mid-20th-century French rule.

Yet, Morocco is far more than it first appears. Presided over by a progressive king who has opened the door to major reforms, Morocco is a Western-friendly nation with one foot anchored comfortably in the past and the other striding confidently into the future. 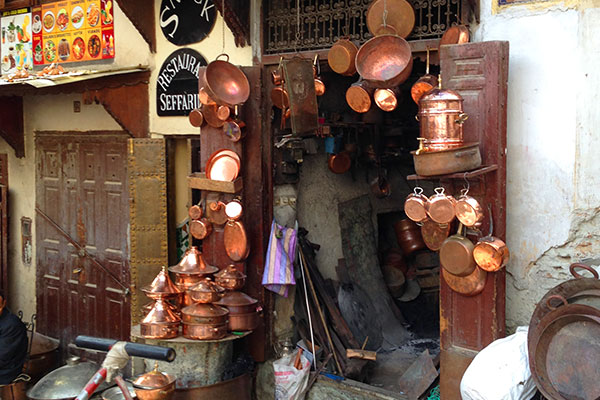 They've been selling goods in the Medina in Fez since medieval times.

The Medieval Medina of Fez

After a first morning spent touring Casablanca and its massive Hassan II mosque, we boarded our spacious, air-conditioned motor coach for the drive to Fez. The next day, our small group of 18 ventured into the souks of its famed medina, to experience a cornucopia of sights, sounds and smells. We walked along narrow, uneven alleyways, with daylight filtering down from above high gray walls, enjoying up-close looks at tables heaped with spices, dried fruits, fresh fish or silk and leather garments. They've been selling goods and working metal by hand in the medina since medieval times, and today's generation works in the same stalls their ancestors once did. And everywhere, there are cats, scrounging, prowling and sleeping - the mascots of the medina. 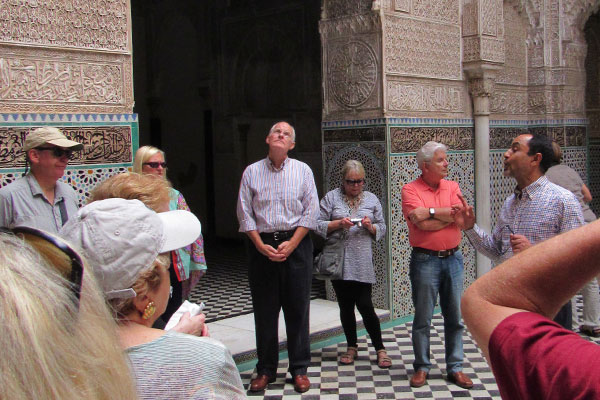 Geometric design is carried to a fine art in the delicately carved Karaouine.

Centers of Faith and Learning

Led by our Resident Tour Director Mohamed Zahidi and his team, we were allowed to enter the Karaouine, the oldest continually operating university in the world. Founded in 859, virtually every surface of its quiet inner courtyard is decorated with highly detailed, delicately carved geometric patterns. Prohibited by their faith to use representational art such as icons, statues and paintings, Muslims employ geometric patterns to evoke spiritual meaning. Entering this graceful place that seemed hidden in the medina was like lifting the veil on an ancient culture that once kept outsiders at arm's length. 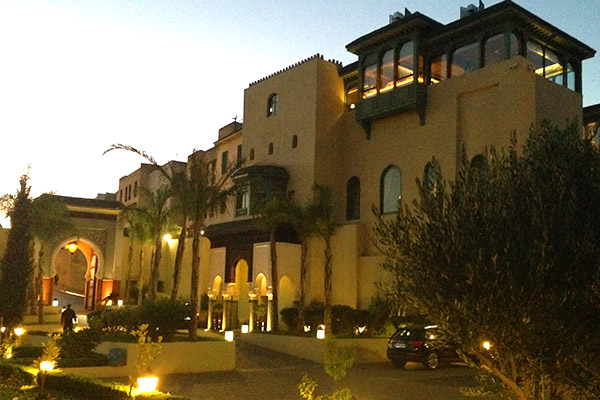 We relaxed in luxury at the the Hotel Palais Faraj Suites & Spa, a former palace in Fez.

The Times They Are A-Changin' … Slowly

Joining us for dinner was Fatima Rhorchi, Ph.D., professor of linguistics at the University Moulay Ismail School of Law and Economics in Meknes. She was on hand to give us a frontline update on the progress of women's rights in Morocco. I'm certain more than a few of us were surprised to learn Moroccan women had only gained the right to vote about 30 years ago, and could only initiate a divorce as of about five years ago. Fatima assured us that women were making great strides in academics and government, thanks to their own determination to organize and the forward-thinking policies of the current monarch, King Mohammed VI. 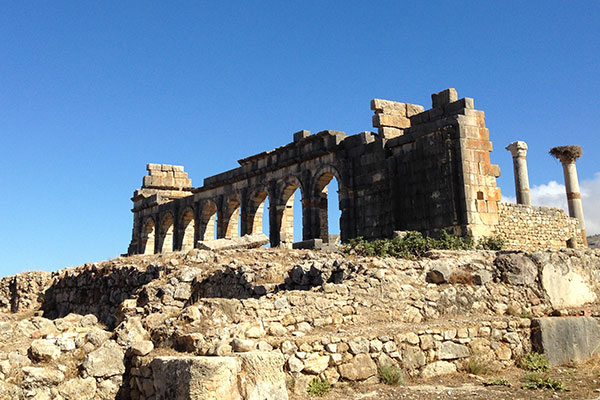 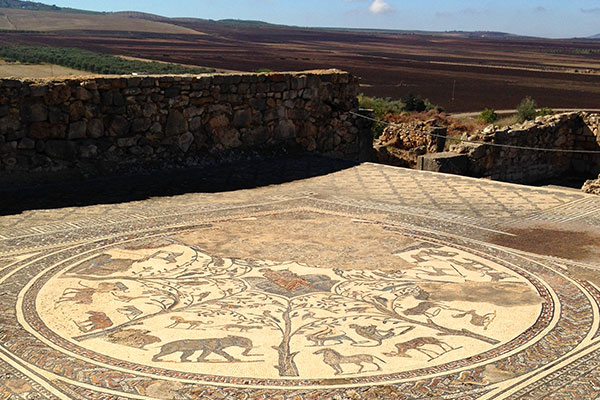 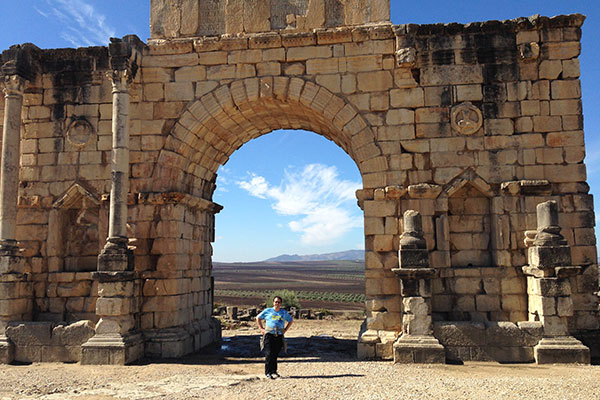 In Volubilis, I stood in before the Arch Caracalla some 2,000 years after it was built.

Lost Outpost of the Roman Empire

The next day, we started out for Meknes, stopping en route to explore the stunning ruins of the ancient Roman city of Volubilis. Impressive stone arches and columns, some tumbled down and others still standing tall against the vivid blue sky, invited us to take a step back in time. Here, floors of what were once family dwellings are still covered with decorative tile mosaics depicting mythological beings, such as Orpheus charming animals with his lyre and Hercules performing his legendary 12 labors. That so many of these tiles are still in place, let alone still exhibiting their colors after centuries of exposure to the elements, is astonishing. 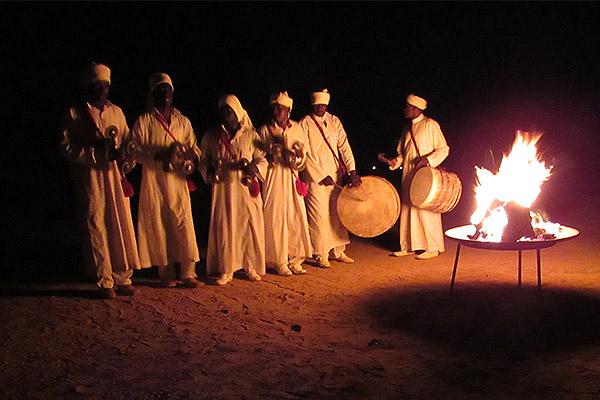 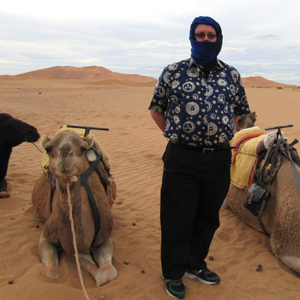 I, like my fellow guests, was wrapped up Berber-style by our guides for our camel ride cross the Erg Chebbi dunes.

At the start of our much-anticipated desert camp experience we headed out into the Sahara in a group of 4x4s, rolling across the dusty landscape like a commando squad in an action-adventure flick. 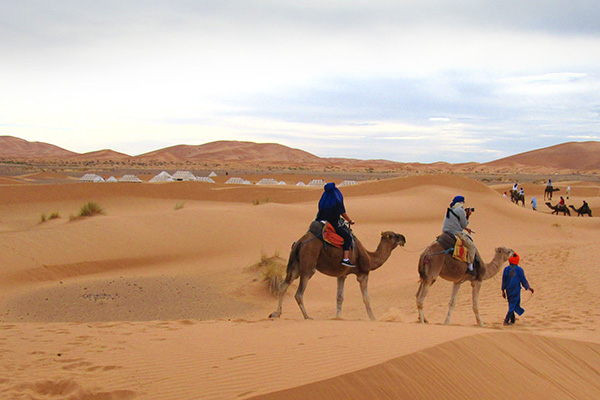 From aboard our "ships of the desert" our tented camp comes into view.

When we came to a halt among the tall Erg Chebbi dunes, our "ships of the desert," and their attendants, awaited us. They properly outfitted us, wrapping our heads in scarves, Berber fashion, so that only our eyes remained uncovered. Mohamed demonstrated the proper method for boarding a camel. Then it was our turn. It's a bit of a shaky proposition for a first-timer, but once your body adjusts to the languid beast's shifting haunches, it starts to sort out.

We arrived in camp after about a half-mile ride and "checked in" to our large, airy Berber-style tents, where our luggage was already waiting for us. We were treated to a small glass of Morocco's signature mint tea, poured from a silver tea service, before transferring to quiet spot out in the dunes for a relaxing Scenic Sundowner. Wines and snacks were served as we chatted about our camelback adventure and watched the setting sun cast shifting hues of orange and red across the desert. Returning to camp in the fading twilight, we gathered around a small bonfire for a live performance of traditional Berber folk music that combined vocalizing with dancing to rhythms produced on small drums and castanet-like qaraqibs. Then, while the fire still glowed, we adjourned to a nearby tent for a Moroccan dinner complimented by fine wines. We later slept in peace amid the silent dunes of the Sahara. 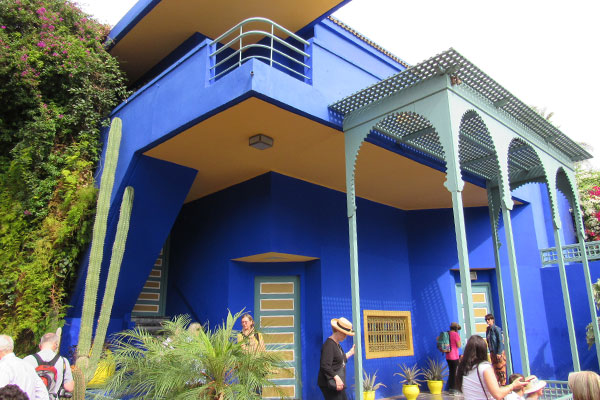 The brightly painted Berber Museum, in the Jardin Majorelle, in Marrakech.

In the Jardin Majorelle, Marrakech

Our first full day in Marrakech included a visit to the Jardin Majorelle, a decorative garden of rare cacti and other desert plants, created by French painter Jacques Majorelle and later restored by fashion designer Yves Saint Laurent. As a long line of people stood outside the garden wall, waiting for their turn to enter, we arrived by horse-drawn carriage and were ushered in immediately, thanks to A&K. 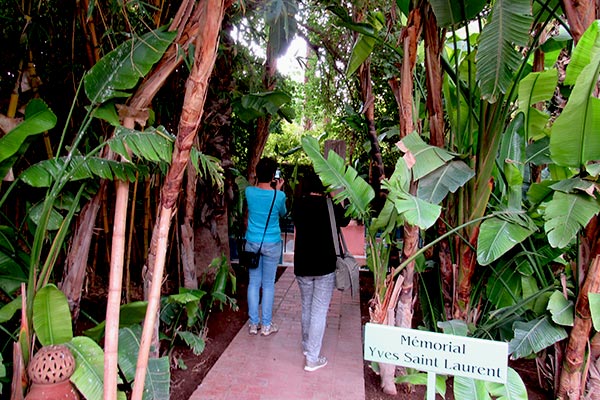 Near the Yves Saint Laurent Memorial In the Jardin Majorelle, Marrakech.

We strolled the grounds at leisure, taking in the garden's peaceful atmosphere and appreciating the austere, distinctive beauty of cactus. The garden is also home to the Berber Museum, which houses a small but spectacular collection of authentic Moroccan garments, weapons and jewelry, dating to the 19th century and before. The craftsmanship and artistry, particularly of the women's dresses, had surely not been lost on Yves Saint Laurent, who arranged to have his ashes scattered in the garden, where a small monument marks his passing.
Categories: News & Views
Tags: morocco, africa;