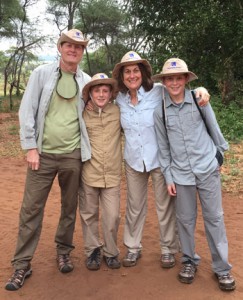 This June my wife, Laura, and I took our two boys on an A&K Safari in Style, during which we would stay in luxury camps and visit the three main parks in Tanzania. Like all expectant African explorers, we knew about the “Big Five” (lion, leopard, rhino, buffalo and elephant) and a small part of me -- the unreasonable, waiting-by-the-water-cooler-wanting-to-brag part -- was ready to grade the trip on how many of these animal celebrities we saw. It turned out we saw all five, effortlessly and in multiples, almost as if they were waiting patiently for us to arrive. But it turns out our safari was not about what we saw so much as what we learned along the way.

1. Journeys aren’t always from here to there.

Our noble guide, Philip, knows a lot. He is a local Maasai, with 14 years of guiding and a degree in wildlife management under his belt, and he answered every one of the 10,000 questions we asked him with the quiet assurance of someone who has never been caught out. The word “safari,” he told me, was Swahili for “journey.” What I would find out later is that it doesn’t just mean traveling from one place to another. A safari is a kind of inside spiritual journey, and as anyone who has gone on one will tell you, it changes you. It even changed our family dynamic, bringing us closer to nature and to each other.

2. Safaris bring out the child in all of us.

My two sons are 12 and 13 and I wasn’t sure how they would do with the all-adult group, the all-day game drives, the candle-lit, long-table bush dinners and the eerie netherworlds between Wi-Fi zones. But all misgivings melted away when, on the second day, we were driving back to Sanctuary Swala Camp in Tarangire National Park. Suddenly, we were surrounded by elephants in the dying light of the afternoon, in the green crease of a creek where the grasses were glowing like fiber-optics sticks. The two Land Cruisers cut their engines and we sat like two rocks amidst a gray flow of the feeding giants. There were hundreds of them yet the only sound in the world was the rhythmic swish wish, swish wish of trunks ripping grass. After half an hour, I looked at my sons’ awestruck faces and then the faces of the other guests, two guides and two drivers. Everyone’s expression was the same, as if we were all seeing things like we did when we were young.

3. Words can’t capture the wonder of a firsthand experience. 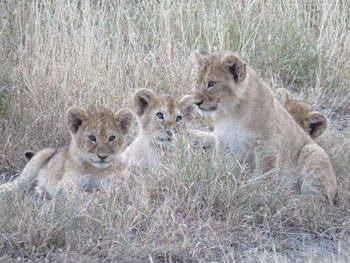 On our first afternoon in the Serengeti, we drove out from Sanctuary Kusini Camp looking for lions, partly because the Southern Serengeti is a great place to find them and partly because it was only lions and leopards that remained unchecked on our Big Five list. You know how it is when expectations are all fired up and the sun is sinking and you might have to go back to camp lion-less. We curved around a kopje (an improbably large pile of boulders) and there they were... five of them, ten yards from our tires. A mother and four cubs sweetly reminiscent of, and no bigger than, moderately sized stuffed animals (the take-to-bed kind). As the babies wrestled, nursed, staggered and tumbled over her, the lioness looked straight through us, as if our Land Cruiser was just one more boulder on the pile. It was one of those few moments in my long, travel-filled life that I would never have to try to remember. And it all came down to wonder, that precious and almost extinct sensation in this over-digitalized age.

I could try to explain why a safari changes you, but you would have to sit there while I attempt to capture more moments like this that express the power of big nature, the vastness of the savannah, the smallness of you. But these wonders lie far beyond the reach of words and you must discover them for yourself.

4. “Luxury” is sometimes measured by what isn’t there.

Yes, it can mean a penthouse suite, with five choices of pillow and a bath bigger than a swimming pool. But I found a keener definition of ”luxury” in the Ngorongoro Mobile Camp hidden away beneath the flat-topped acacias on the rim of the Ngorongoro Crater. It wasn’t just the crisply uniformed and smiling staff that offered cool towels as we climbed from the Land Cruisers after yet another wow-filled day (see “wonder” above). Or the back-to-childhood delight of having your own spacious two-room tent, complete with wall-to-wall carpeting, a four-poster bed, flush toilet, hot shower, electric lights, overnight laundry service and Cozmas, the kindest, most efficient aide de camp you will ever meet. What made the Ngorongoro Camp so luxurious is that these considerable comforts exist in a small circle of electric light amid the untamed vastness of the East African bush.

I understand why some families prefer to travel alone on their own customized itinerary. Most of the time, I feel exactly the same way. But this trip presented a serious challenge to my go-it-alone individualism. Eight strangers joined “our” family safari on the first day. Thereafter these people added eight different ages, accents, interests, senses of humor, dreams, dinner party conversations, political perspectives, and a hundred other flashes of bright color to an already kaleidoscopic trip. Sharing Land Cruisers and camps, picnics and candlelit dinners, wonderful experiences and, ultimately, photographs and e-mail addresses, these fellow guests gave the experience a depth it could not have achieved without them. If I did it again I would ask all of them along (especially Philip -- tour guide, teacher, historian, wildlife expert and now my boys’ hero and best friend).

In the meantime, I am left re-living the best trip of my life by sharing my 2,500 photos and hours of road-trembling video with a few fortunate friends (don’t go home now, we’re only half-way through!). The famous dust of Africa has (mostly) been washed out of my clothes. And my unreasonable side is left stalking the water-cooler ready with my story about the belligerent buffalo, the creek crammed with hippos, the blurred herds of zebras, the guilty guile of hyenas. When someone asks if we saw a lion, I smile, teasing out the moment. “No,” I answer, “we saw 23 of them.”