Explained: What is a Stupa? 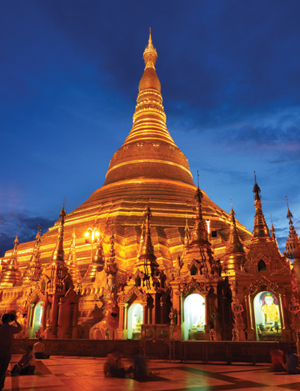 When you travel to Myanmar or other countries in Southeast Asia with A&K, you are bound to see some graceful and majestic stupas dotting the plains and fields surrounding you. They are, perhaps, the region’s most readily recognizable man-made feature. Usually bell-shaped in design and often gilded and bejeweled, stupas are monuments of great significance for devout Buddhists. Most stupas are constructed of solid brick over an earthen base, with small chambers built into them that enshrine objects of spiritual importance, such as relics of the Buddha, sacred images and holy scriptures. The majority of these structures are sealed, although a few have entrances where Buddhist pilgrims can enter and venerate the relics stored within. Pilgrims worship at a stupa by walking around its outside base, usually clockwise — an experience that can prove meditative for Buddhists and non-Buddhists alike. Many believe that circumambulating a stupa purifies negative karma and fosters realizations of the path to enlightenment. Some fascinating stupas are visited on A&K’s Luxury Small Group Journey Myanmar & the Irrawaddy. These include Mahamuni Paya in Mandalay, home to a golden statue of the Guatama Buddha that is believed to have been cast in his presence; Maha Lawka Maranzan, also in Mandalay, where you can view more than 700 marble slabs, collectively referred to as the biggest book in the world; Ananda Temple in Bagan, named for the disciple and faithful servant of the Buddha; and Shwedagon Paya in Yangon, a 325-feet-tall wonder, its surface adorned with jewels and an estimated 30 tons of gold — it has stood for some 2,600 years. Book this extraordinary A&K Myanmar tour and visit them all for yourself.