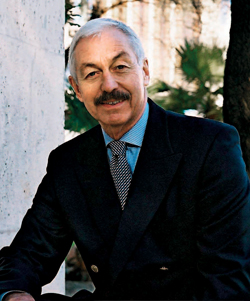 A&K Tour Director Simon Butler-Madden takes you inside the place he knows best — his hometown, Madrid. Travel to Spain, as this madrileño reveals his favorite sites, place to grab a bite, soak up local culture and unearth treasures in Spain’s capital. A diplomat specializing in East-West relations before joining Abercrombie & Kent in 1989, Simon has accompanied groups throughout all of Europe and Russia. His involvement in European arts, politics and culture gives him a unique insight that he shares with his travellers.He is a connoisseur of European wines and cuisine, even producing his own olive oil on a small farm in Extremadura, Spain.

What is your favorite restaurant?

It would be impossible to single out just one. First is Restaurante Santceloni, part of the empire of prestigious chef Santi Santamaría. This is designer cuisine at it finest. Dishes reflect both the old and new — for example, pigeon roasted with pumpkin and truffles. For the purest local tradition, I head for Casa Alberto, going strong for over 150 years. It still has a traditional zinc bar counter, photographs of bullfighters and the feel of old Madrid. Those who do not share my enthusiasm for tripe should try the traditional specialties here, like roast suckling pig or beans with sausage.

What is the best place to grab a drink?

Bars in Madrid are so much more than places where you go just to get a glass of beer or a cocktail. Here, whenever you order a drink, it will come accompanied with tapas, a little something to nibble on. There is no better bar than El Anciano Rey de los Vinos. The décor goes back many decades, the draft beer is perfect and the ham croquettes to accompany it are out of this world. For a more sophisticated drink in the heart of the elegant Barrio Salamanca district, I go to Ramses, a bar-restaurant with design features by Philippe Starck. It is one of the few places here that makes a proper dry martini!

Where do you go to get your fix of culture?

The cultural life of the whole city, particularly art, is one of my principal reasons for living here. The combination of the three great museums in close proximity in the “Triangle of the Arts” is unique. In the Museo Nacional del Prado, I never tire of the superb collections of Flemish paintings. And two blocks away, the Museo Nacional Centro de ArteReina Sofía has taken on a new lease of life under its new director, with galleries now filled with contemporary works. The gallery CaixaForumMadrid is housed in a superb reconstruction of a building that was once a power transformer station.

What is your favorite neighborhood?

Chamberí, where my wife and I live, in the city’s center. It embodies the old fashioned virtues of what city life should be. People live here — within a quarter-mile of my 100-year-old apartment building I have four metro lines, eight cinemas, a traditional produce market, and at least 30 bars and cafes. This is city life as it should be lived!

I buy stationery from Papelería Salazar, which has been owned by the same family since 1908 and is presided over by Ana and her sisters. There are several shops that are unique to Spain and capture the essence of the city, such as Cántaro for ceramics from all over the country and Patrimonio Comunal Olivarero for olive oil.